Most of the data collected during the space shuttle Columbia's final voyage were destroyed when the craft broke up during re-entry. But some data had already been returned, including numerous photographs made with a hand-held digital camera.

Besides the photographs that Columbia's astronauts took for research purposes, they also took many unscheduled snapshots. I've collected some of those snapshots on this page. These images represent things the astronauts wanted to remember, to share with the people back home.

More images, including many of the crew themselves, are available from the [NASA Human Spaceflight server]. Additional information about the mission, including crew bios and a mission timeline, is available from NASA's [STS-107 page].

I encourage you to view and comment on these images. This page can be edited by clicking on the "Edit this page" link at the bottom. See TextFormattingRules for help with that. Thanks. -- JohnCallender 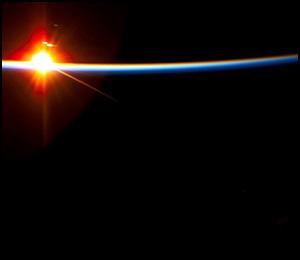 Cameras on unmanned satellites can send us pictures of ocean currents, the weather, and the activities of armies on the far side of the globe, but they're unlikely to snap a picture like this one. A human being will, though. -- JohnCallender 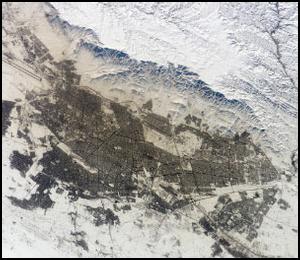 STS107-E-05290 (21 January 2003) --- Using a 400mm lens on a digital still camera, one of the STS-107 crewmembers aboard the Space Shuttle Columbia captured this winter image of Mashhad, Iran. With a population of just over two million, Mashhad is IranˇŻs second-largest city. It is located in the Kashaf River valley near the northeast corner of the country, not far away from the borders of Turkmenistan and Afghanistan. Besides being the capital and center of commerce for Khorasan province, Mashhad is a tourist center as well as a site of pilgrimage for millions to the shrine of martyred ShiˇŻate Imam Reza. The crew of STS-107 acquired this snow-enhanced image just after noon (local time) on January 21, 2003. The long runways of the international airport, on the southeastern edge of the city, run parallel to the prevailing valley winds. Note how little snow is visible in the urbanized areas and the discoloration of snow in the surrounding area, probably due to wind-borne smoke generated by fuel burning in the city. The image was provided by the Earth Sciences and Image Analysis Laboratory at Johnson Space Center. Additional images taken by astronauts and cosmonauts can be viewed at the NASA-JSC Gateway to Astronaut Photography of Earth. (NASA caption) [hi-res version] 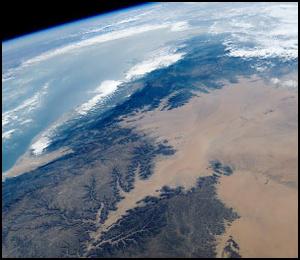 STS107-E-05344 (22 January 2003) --- One of the astronauts onboard the Space Shuttle Columbia used a digital still camera to capture this photograph of Earth's horizon featuring South Yemen and the Gulf of Aden. Also visible are the Hadramawt Plateau and the Ramlat as Sab'atayn sands (long triangular feature). Approximate coordinates of the featured area are 16.0 degrees north latitude and 48.5 degrees east longitude. (NASA caption) [hi-res version] 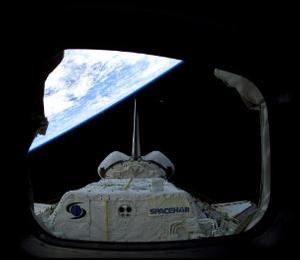 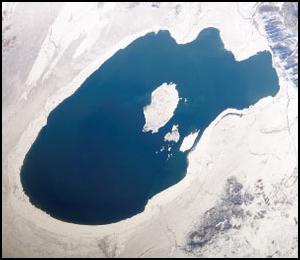 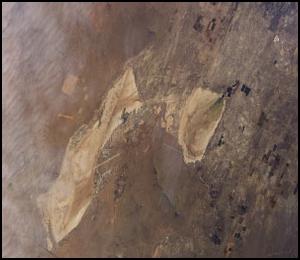 STS107-E-05407 (21 January 2003) --- One of the astronauts onboard the Space Shuttle Columbia used a digital still camera to capture this photograph of Edwards Air Force Base and the Dryden Flight Research Center in the Mojave Desert of California. The runways used for many shuttle missions are visible. (NASA caption) [hi-res version]

I watched the space shuttle Endeavor [land at Edwards] at the end of STS-67 on March 18, 1995. My 4-year-old daughter was playing in the back of our Montero with the daughters of some friends of ours, completely oblivious to what was happening outside, while we adults watched agog as the shuttle came hurtling down out of the sky. That's the thing that struck me the most about seeing the landing firsthand: the way the shuttle came down. Unconsciously, I was expecting to see something like an airplane coming in from out near the horizon, but nope; shortly after we heard the double sonic boom of its arrival, Endeavor appeared way up over our heads, then followed the sides of a tall, narrow cylinder down to its eventual landing in front of us. -- JohnCallender 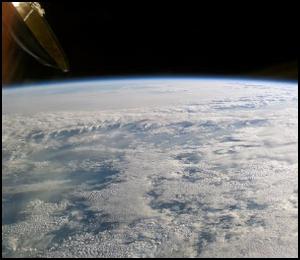 STS107-E-05484 (22 January 2003) --- This heavy cloud cover typifies most of the out-the-window scenes witnessed by the STS-107 crew as it orbited Earth aboard the Space Shuttle Columbia on Flight Day 7. (NASA caption) [hi-res version] 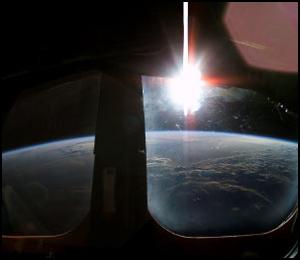 STS107-E-05485 (22 January 2003) --- One of the crew members aboard the Space Shuttle Columbia used a digital still camera to capture a sunrise from the crew cabin during Flight Day 7. (NASA caption) [hi-res version] 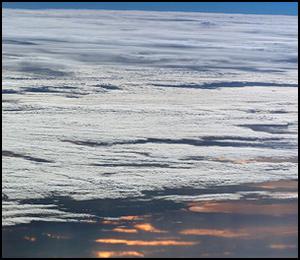 STS107-E-05537 (25 January 2003) --- One of the STS-107 crew members used a digital still camera to capture this image of clouds, shadows and sunglint during a moment away from Flight Day 10 science research aboard the Space Shuttle Columbia. (NASA caption) [hi-res version] 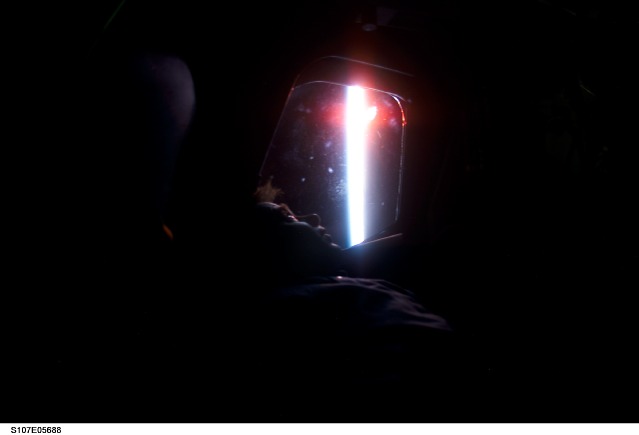 The majority of the snapshots Columbia's crew took were pictures of the other crewmembers. On this page I've chosen not to include those photos, but here I've made an exception. I think this is a beautiful photograph, one that captures the essence of what these images mean to me. It reminds me of the last shot in Kubrick's 2001: A Space Odyssey. I was surprised to learn that Ilan Ramon was 48 when this picture was taken; to me he looks about 8 years old here. -- JohnCallender 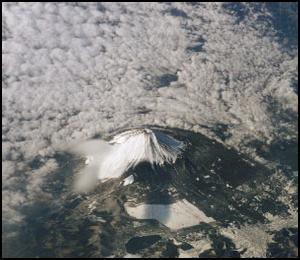 STS107-E-05690 (26 January 2003) --- This digital still camera's image, photographed from the Space Shuttle Columbia, shows Mt. Fuji on the island of Honshu, Japan. The snow-capped inactive volcano, surrounded at lower levels by clouds in this image, lies several miles south of Tokyo. The image was provided by the Earth Sciences and Image Analysis Laboratory at Johnson Space Center. Additional images taken by astronauts and cosmonauts can be viewed at the NASA-JSC Gateway to Astronaut Photography of Earth [link to ]. (NASA caption) [hi-res version] 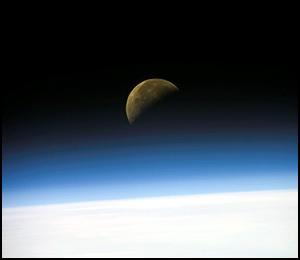 STS107-E-05697 (26 January 2003) --- A quarter moon is visible in this oblique view of Earth's horizon and airglow, recorded with a digital still camera aboard the Space Shuttle Columbia. (NASA caption) [hi-res version]

A copy of this image ran alongside the New York Times editorial that ran on February 2, 2003. I found it very moving, and tried to find a higher-resolution version of it on the Web. I failed, but when I mentioned my failure to my friend Hiro, he quickly located it for me. Because NASA's server appeared to be experiencing bandwidth problems in the wake of the disaster, he mirrored many of the images on his own server, which is where I'm pointing for this page's hires versions.

This image reminds me of the famous photograph [Earthrise], taken by the astronauts of Apollo 8. That image, like this one, offers a heart-stopping perspective, a point of view impossible to achieve from the surface of Earth. Our minds are so good at taking the frequently-seen for granted; we quickly learn to tune out the beauty that surrounds us. But then along comes an image like this, something we've never seen before, and we're forced to stop and truly see, if only for a moment.

As blasé as we've managed to become about human space travel, it's perspectives like these that, to my mind, make it worth the terrible risks involved. I like to think that a similar belief motivated Columbia's crew. This page is my way of honoring their courage, and their vision. -- JohnCallender